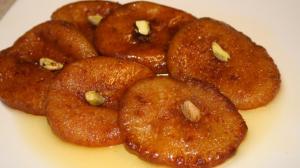 This is an Indian sweet-lover’s delight. Malpua or the sweet , fennel scented fluffy Indian pancakes drenched in sugary syrup and when served along with rabri becomes heavenly delicious, a deadly combo which can never go wrong and make the festival of color and joy all the more delicious and sweet.
Malapua which is also served to Jagannath in his Sakala Dhupa (Morning food served to the lord). It is During Paush Sankranti, Malapuas are prepared in Bengali homes. Malapuas along with mutton curry is served in many non-vegetarian Maithil homes during Holi
Malapua is popular in Bangladesh, Odisha, West Bengal and Maharashtra and Nepal where it is served during festivals along with other sweets. Amalu (Malapua) is one of the Chapana Bhoga of Lord Jagannath and included in the Sanja Dhupa (evening dhupa). Other variations of Malapua use pineapples or mangoes instead of bananas. Bengali, Maithili and Oriya malapua is traditionally made only with thickened milk and a little flour (sometimes rice flour instead of wheat flour).
Malapua in northern India, particularly in Uttar Pradesh, Bihar and Rajasthan, don’t contain fruit. There are several variations, using some or all of the following ingredients: maida (refined flour), semolina, milk, and yogurt. The batter is left to stand for a few hours before being spooned into a kadhai of hot oil to form a bubbling pancake which should be crisp around the edges. The pancakes are then immersed in a thick sugar syrup. Malapua is a popular sweet to make on the Hindu religious occasion of Holi. Malapua is served at the Jagannath Temple in Ahmedabad daily as prasad.
Every year on Janamashtami ( Birth day of Lord Krishna ) , in our house there is tradition to to serve Malapuas , mom in the morning prepares the batter of Malapua … I cannot control my craving for malapua , hence i would start dipping my finger in batter and start flavoring the batter and believe in me … batter itself is so flavorful it has aroma of fennel , cardamon and bay leaf …
Malapua is one dessert which makes the Indian cuisine complete … though its very easy to make and has got simpe recipe but most complicated .. It has to have crunchiness still be melting in the mouth . Sugar syrup makes it fluffy and sinful . Mom says the secret of Malapua is not batter … The secret is sugar syrup . I could not understand … Iam gonna try making this sinful Indian Dessert … are you also ?