When we think about Ma , Maati , Manush … only one thought … Trinamol Congress and Mamta Di … Well this is not Politics we are going to talk or discuss … the north-eastern part of South Asia, at the apex of the Bay of Bengal and dominated by the fertile Ganges delta. The region was politically divided in the 1947 Partition of Bengal based on religion: predominantly Hindu West Bengal became a province (now a state) of India, while predominantly Muslim East Bengal became a province of Pakistan and later gained independence as Bangladesh.

For me bengal is not a new . I inherit some genes of Bengal as my mom is bengali that Bangal ( East Bengal which is now Bangladesh ) … Though culturally Bangal and West Bangal remain the same accept the religion part but they are different in food , language .

Fish has been important aspect in both Bangal as well as West Bengal. Every thing in Bengal starts and end on Fish … If East Bengal looses the footfall match , The price of fish would go high … if Mohan Bagan looses , then prices of fish dips north . So Fish is the main ingredient of Culture of bengal or Bangal .

Talk of Fish … The first thing which come in mind is Ilish or Hilsa . Tenualosa ilisha (ilish, hilsa, hilsa herring or hilsa shad) is a species of fish in the herring family (Clupeidae), and a popular food fish in South Asia. In Bangladesh, fish are caught in the Padma-Meghna-Jamuna delta, which flows into the Bay of Bengal and Meghna (lower Brahmaputra), and Jamuna rivers. In India, the Rupnarayan (which has the Kolaghater Ilish), Ganges, Mahanadi, Chilka Lake, Narmada and Godavari rivers are also famous. Ilish is most costly Fish today in market … But how much it may cost , once a year every Bengali house would savor it … Ilish means Queen of Fish and Ilish means celebrations .

In many Bengali Hindu families a pair of ilish fishes (Bengali: Joda Ilish) are bought on auspicious days, for example for special prayers or pujadays like for the Hindu Goddess of music, art and knowledge Saraswati Puja.

Mom brought the seasons first Ilish last evening and was excited that Ilish has been bought . Talk of the town . Called her freinds and my mammi , mentioned illish has become so costly

One is a True Heart Bengali life without Ilish ( Hilsa) Like Human cannot live without Oxygen same way a Bengali cannot live without taking Hilsa . Thats what I have come to know the very fact about Bengalis. It is said that only Bengalis know the art of eating hilsa while talking. and one more thing about Hilsa is that nothing is waste. from shells to its oil every thing is used and very tasty. it is totally your choice that u want to eat fried Hilsa or the steamed one both way its delicious.For frying u just need to marinade the fish for at least half an hour with turmeric and salt then deep fry in mustard oil.This fish is high in fat and the oil which is remained after frying the fish that can be used in cooking other vegetables . My favorite is :

Bhappe Ilish ( Steamed Ilish ) Hilsa steeped in a pungent mustard sauce steamed to perfection with a liberal dousing of mustard oil is a sensuous experience garnished with green chillis. There are two ways of doing this, actually 3, in the pressure cooker like my Mom, in a steamer and in the oven.

Taste of Mustard ,Pungency of Mustard and little saltiness which gathers illish is flavor to savor for . It is just experience one lives and relives every year with ilish . Grand moms , Moms , aunties , uncles , durga pooja , Marriages and every day becomes a festive occasion once ilish comes home and cooked 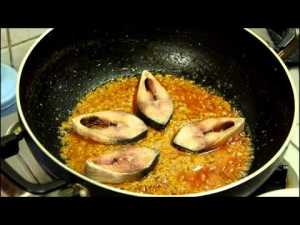 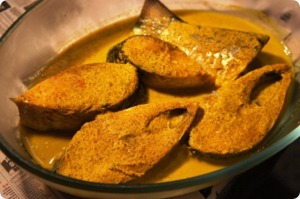