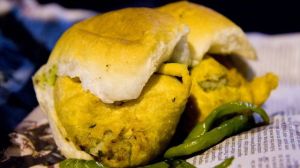 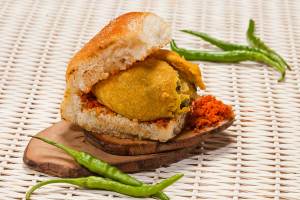 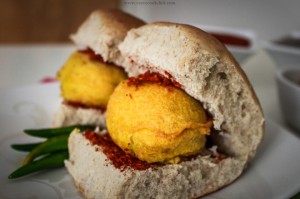 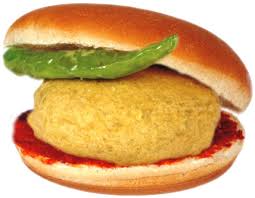 Interesting when i found in 5 star hotel serving this during tea time at a seminar or congress . In many restaurants , I found a dish is coming up and finding its space in culinary scene specifically in Delhi city . Its one of dishes which is very common in the mumbai and is common man’s dish in mumbai or state of Maharashtra but in Delhi … It been showcased as cuisine . In Mumbai VADA PAV is wrapped in newspaper and one can have bite board the local train . But in Delhi – Its authentic gourmet food .

Mumbai’s quintessential street food—belied the food’s humble constitution of a chickpea-battered, deep-fried, spicy mashed potato patty (the vada), tucked into a slightly sweet soft bread roll (the pav). Vada pav, like the Pav Bhaji, was invented in Bombay. The creation of the dish is credited to Ashok Vaidya, a snack vendor who ran a street stall just outside Dadar station. Being a major commuter hub and an important station, it was seldom uncrowded. To be innovative and unique, Vaidya reportedly came up with this recipe in 1971 to kill the hunger of the ever-moving commuters who looked like they were in desperate need of a snack that they could eat on the go. In a way, it was like our own version of fast food. He served it up with fiery red chutney that could include coconut, peanuts, chillies, garlic and tamarind pulp. Safe to say, the rest is history.

The vada pav marries a spiced potato patty – the vada – with a white-bread bun – the pav. But it also binds together Mumbai. Cheap and served outdoors, the sandwich brings laborers, office stiffs, and students elbow-to-elbow around the stalls. Even the making of vada pav is an act of local love. Also termed as the poor mans food. Its basically Indian Hamburger or Mumbai Hamburger … Authentic Burger which found its way to menu of Restaurants now . A street food which became a gourmet food.

To understand Maharashtra politics , one needs to dig into as many as Vada pavs one can feed upon. Shiv Sena a regional political party in Mumbai as well as a big player in Maharashtrian politics organizes a Vada pav sammelan every year ( Vada pav convention ) where atleast 5 major brands of Vada pav come including goli vada pav , jumbo vada pav and many street food vada pav vendors come to participate. Food culminating to regional politics . Thats why i say ” Understand Food understand politics of land ”

Vada pav has all flavor … The flavor of street food which has humble origin but then it has got all right flavors to scintillate the taste buds which gives it a aroma to politics as well as a gourmet food .