The recipe for the “Breakfast with eggs” is Egg roll. easy to cook and quick egg recipes for the morning meal  the Indian way .. actually the Calcutta way . Actually this dish is all time meal ..whether breakfast , Lunch , snack or Dinner … Its full filling
Anyone who’s been to Kolkata and eaten one of these will understand how occasionally the desire to eat one . Though many different Asian countries claim for the origin of this dish and among them southern China has the most number of votes, but this particular preparation very well known to everybody who hails from Kolkata or even those who had a visit to the city is typically from the make shift stalls on Kolkata foot paths.

The egg roll in Kolkata is similar to Frankie of Mumbai and resembles the kathi rolls prepared in many roadside stalls throughout India. Egg roll in Delhi was probably first introduced by Nizam’s, a very popular restaurant in Delhi serving Mughlai dishes. 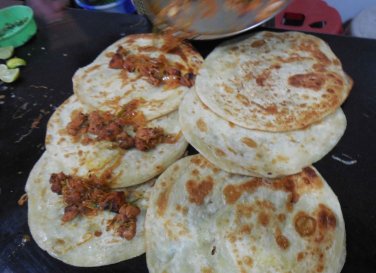 Beat eggs. Add a little milk or salt if desired. Have all salad ingredients thinly sliced and ready.
Heat 1/4 of the oil in a flat large frypan.
Pour 1/4 of the egg mix in and swirl it around to make an omlette the size of the roti. Before the egg sets, place a roti on top and press down gently.
When egg is cooked, flip roti and cook for a couple of seconds.
Remove from the frying pan and place on a board, egg side up.
Arrange 1/4 of the sliced cucumber and onion and 1 sliced chilli (and chicken if using) in a line up the centre of the roti. Squeeze on a little tomato sauce.
Roll up with the salad ingredients in the middle.
Wrap with a piece of lunch paper/greaseproof paper to hold it all together,.
Repeat for the rest of the egg, roti, and salad ingredients.
Enjoy!
Up Next